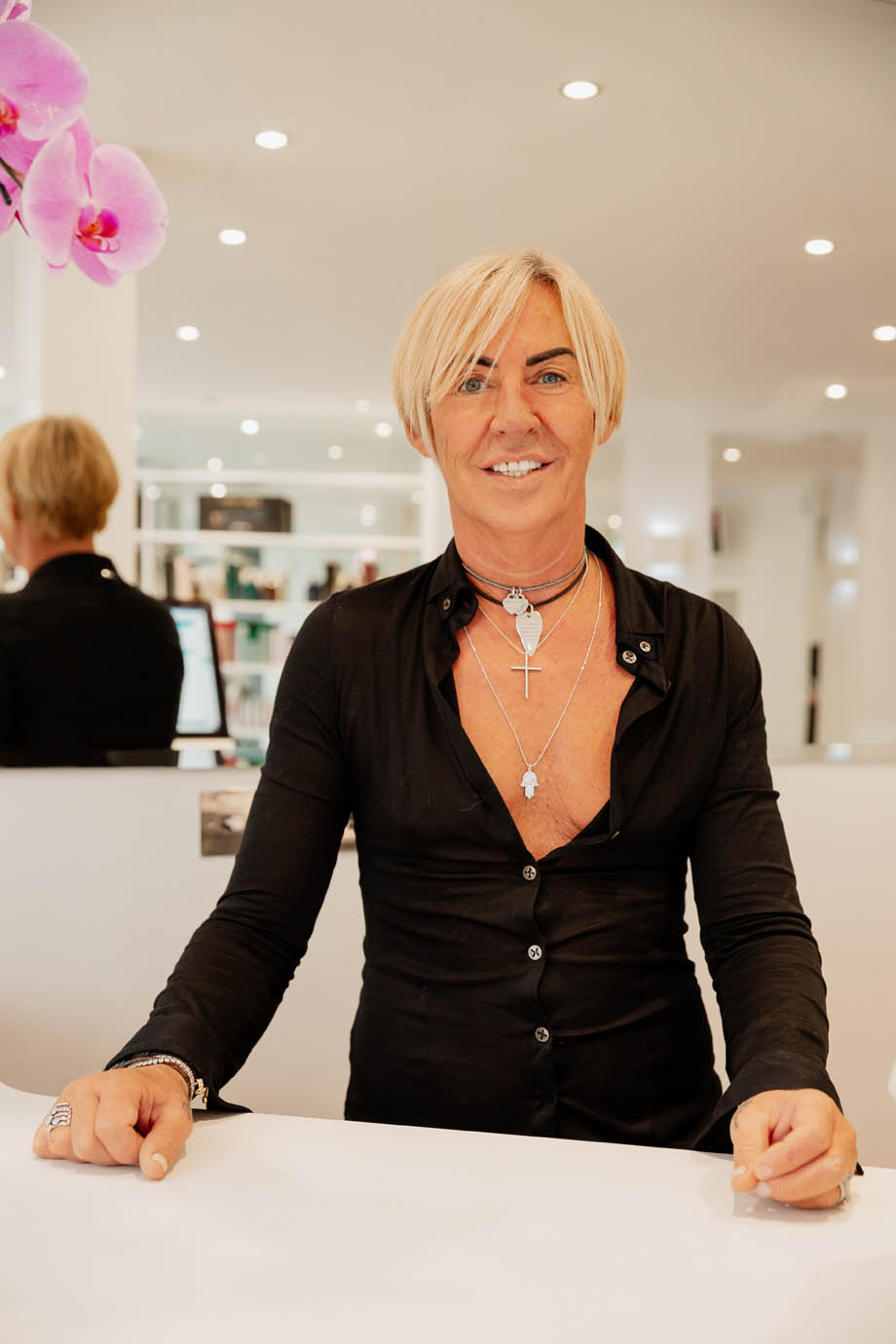 Having served his apprenticeship in his home town in the 1980s, salon owner Freddie returned to his Rawtenstall roots in 1992 to establish his own salon in prestigious premises on Bank Street.

After 6 years with Manchester’s Pierre Alexandre, Freddie left his Style Director post to join the John Peers group as Artistic Director, where he gained the first of his 6 nominations for the British Hairdressing Awards. Here he began his involvement in shows and seminars in the UK and abroad.

With a long-standing connection with Schwarzkopf, Freddie has appeared for the company in seminars throughout the UK and Europe, teaching an insight into the inimitable skills and talents offered by Freddie & his team. 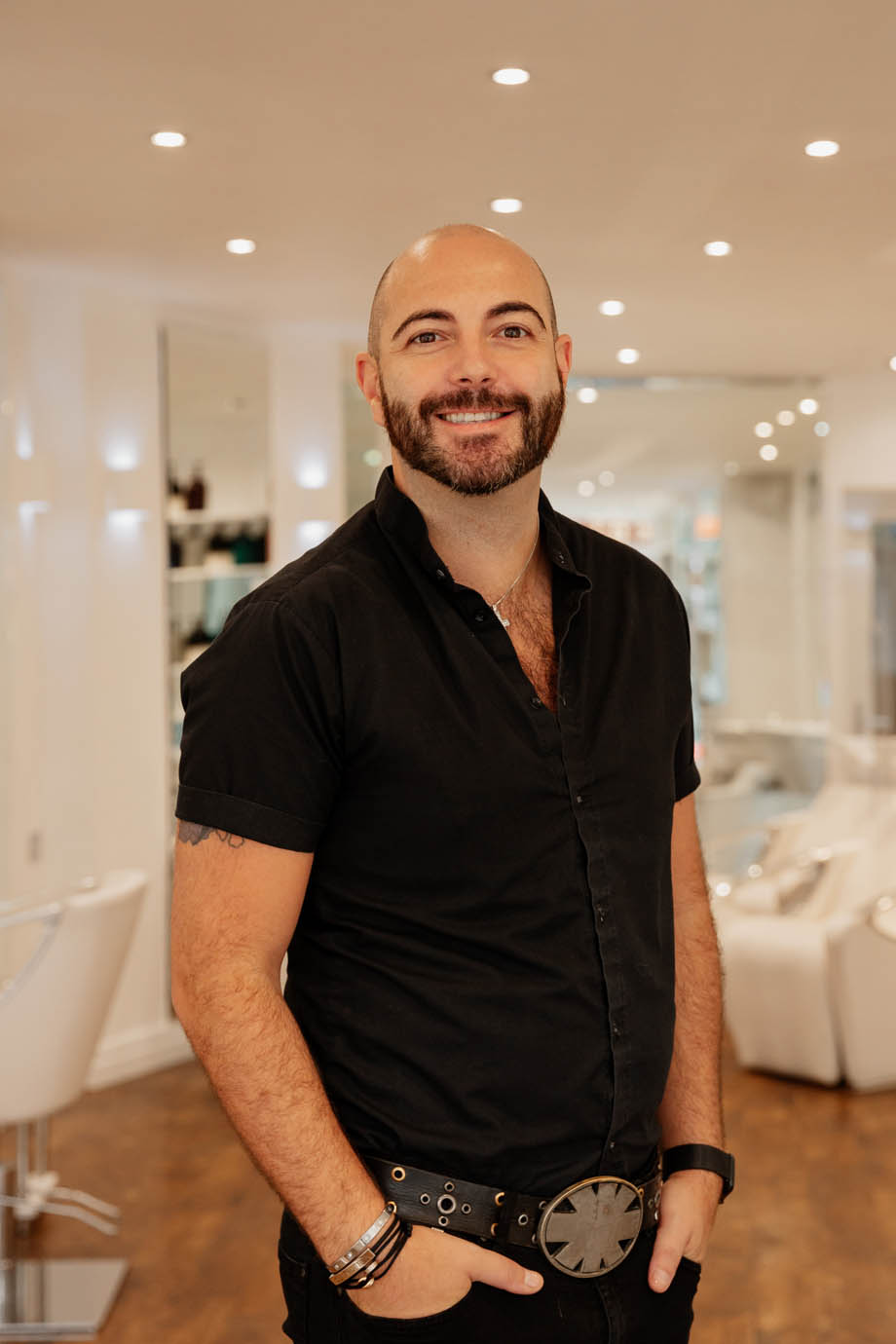 Matt joined the Freddie’s team in 2000 and quickly progressed through the ranks becoming Fred’s colour technician and building up a magnificent following of loyal clients resulting in running a full column by the age of 19, and becoming a finalist for Junior of the Year in the British Hairdressing Business Awards.

He has served on Schwarzkopf’s Young Artistic Team for over 3 years and worked closely with the product giant teaching in seminars, working on stage across the UK, and more recently was part of the UK Inspire Team working with industry legends. He has travelled extensively shadowing Freddie at all the salon’s major shows, seminars and photographic shoots. Matt’s work has appeared in publications such as Hairdressers Journal, Creative Head, Nobu and has been on the front cover of HAIR Magazine, voted Best Cover of the Year. Matt has also had appearances on ItvBe and Channel 4.

Matthew heads the Freddie’s Artistic Team and has helped secure many wins at Schwarzkopf Creative Team competitions and appeared on stage at hair shows across the UK including Salon International, Hair Fair and Pro Hair.

Matt is also a qualified assessor with an accredited teaching qualification and works closely with Accrington and Rossendale College delivering in salon education to our students. 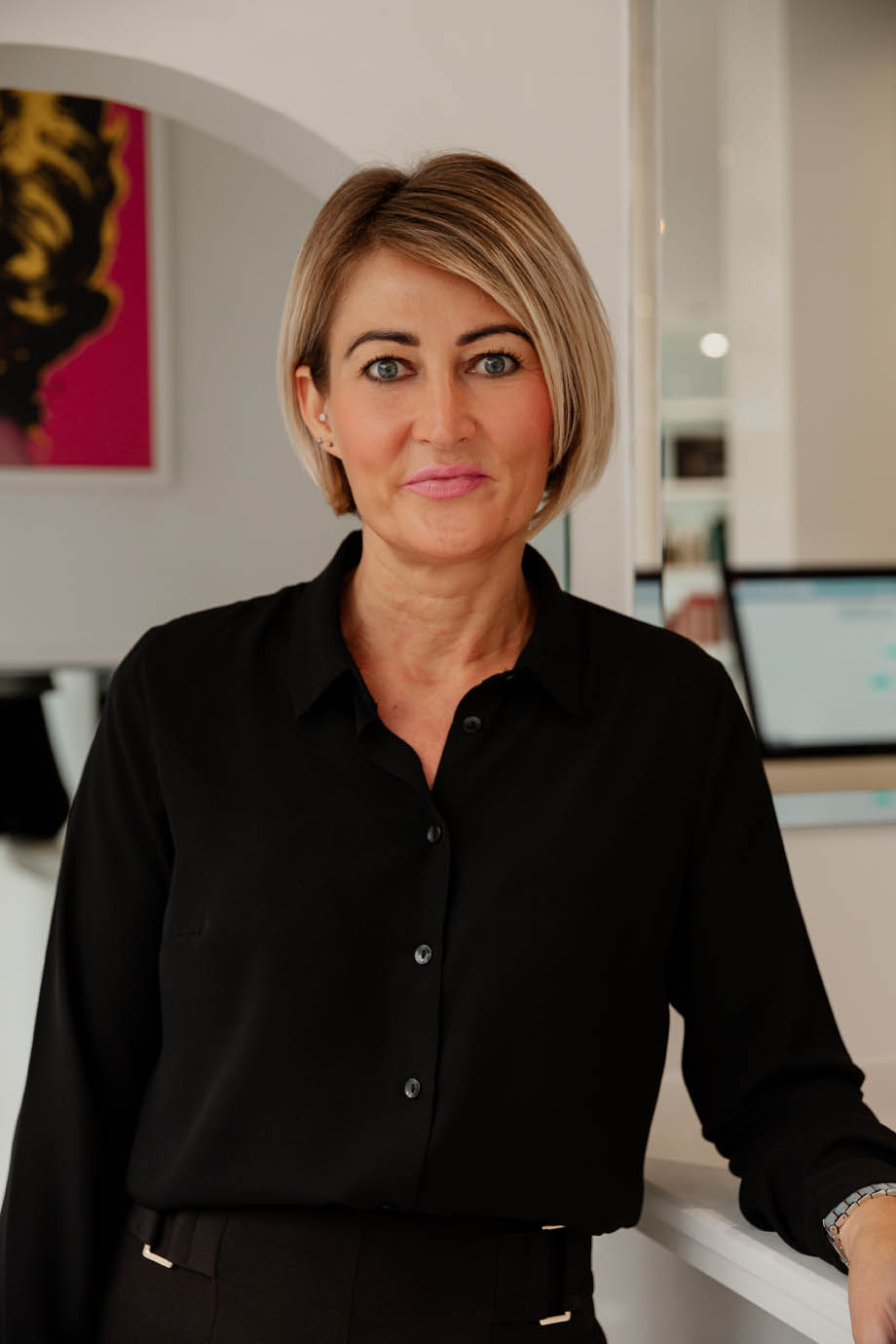 Hayley began her career in hairdressing aged 14, working in local salons on Saturdays and late nights.

In 1992 when Freddie’s doors first opened Hayley joined the team as the first ever junior and has been there ever since!

Soon running a busy column, Hayley worked with Schwarzkopf on the Young Artistic Team. As her passion for hairdressing progressed she was soon nominated for New Comer at the British Hairdressing Awards. Her work has appeared in Hairdressers Journal, Hair Flair and Hair and Beauty magazines.

Working on stage at seminars and shows in the UK and abroad including Dubai and South Africa has been a dream come true for Hayley. She also has a qualification in teaching, helping the newer members of staff progress in their own hairdressing careers.

Hayley has loved being a part of the Freddie’s team for all these years and her hairdressing is constantly developing with new techniques, products and training gaining confidence, experience, great skills and amazing friendships with both other fantastic long serving, dedicated team members and loyal clients old and new. 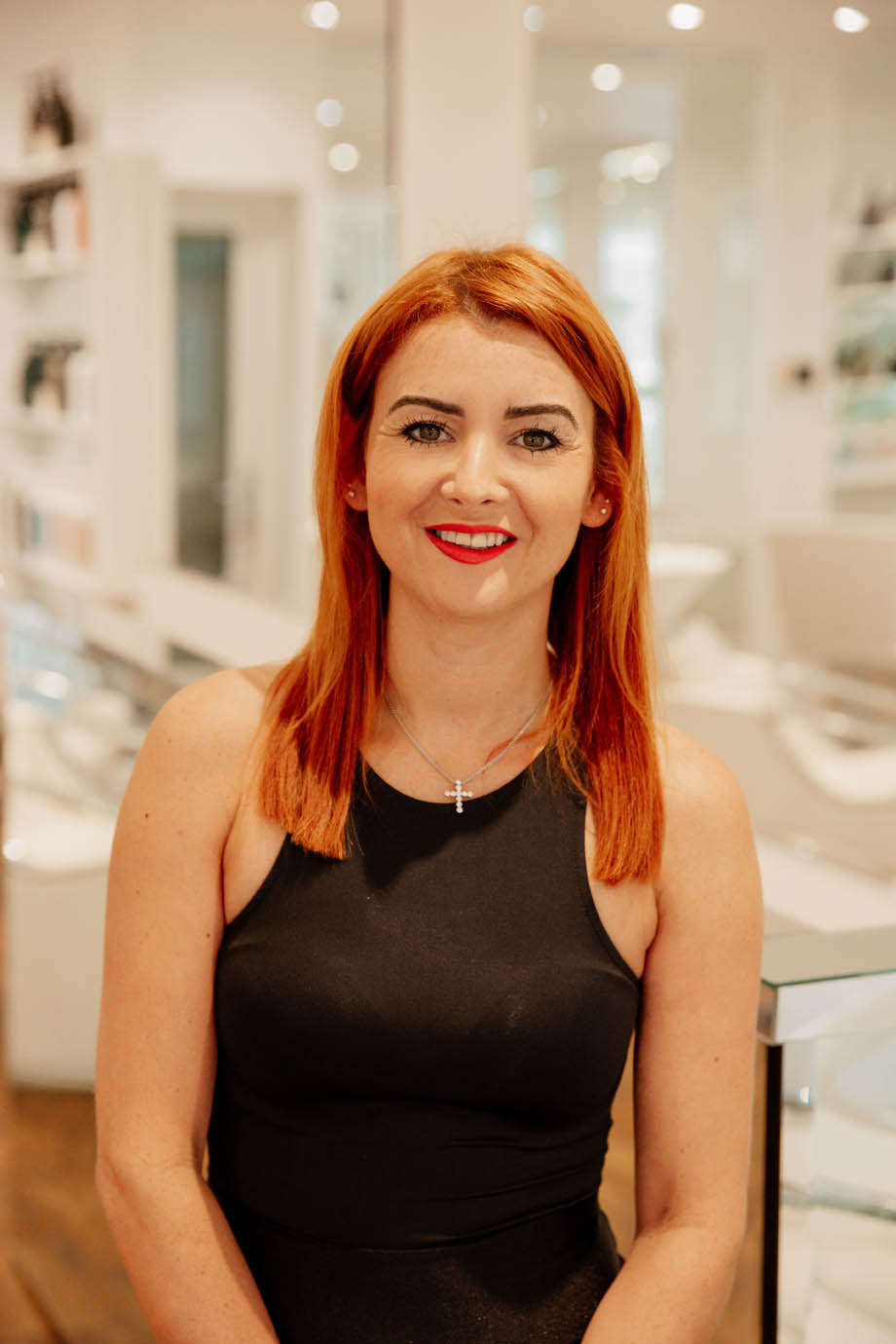 Jade joined the Freddie’s Team in 2001 fresh out of school, and soon became one to watch! She flew through her college qualifications and finished her level 3 Hairdressing aged 18. Jade also started to develop her long standing connection with product giant Schwarzkopf by being selected for their Young Artistic Team 3 years running.

Loving the stage work and seminar side of hairdressing Jade became a core member of the Freddie’s Art Team and has travelled the UK with both Schwarzkopf and Freddie’s presenting live models and taking part in photo shoots. Jade has also compared for some of the Freddie’s shows and has a natural flair to engage with the audience, and aided in the winning of several Creative Team Competitions held nationwide by Schwarzkopf.

Jade always wants to push herself and has completed the intensive Colour Masterclass Expert course from Schwarzkopf and is also a qualified assessor and internal verifier, helping with the in salon training and education Freddie’s offers in conjunction with Accrington and Rossendale College.

Never shy and with strong opinions, Jade is a natural fit for the role of Salon Manager keeping the salon running smooth on a daily basis and keeping a check on the other members of the team. 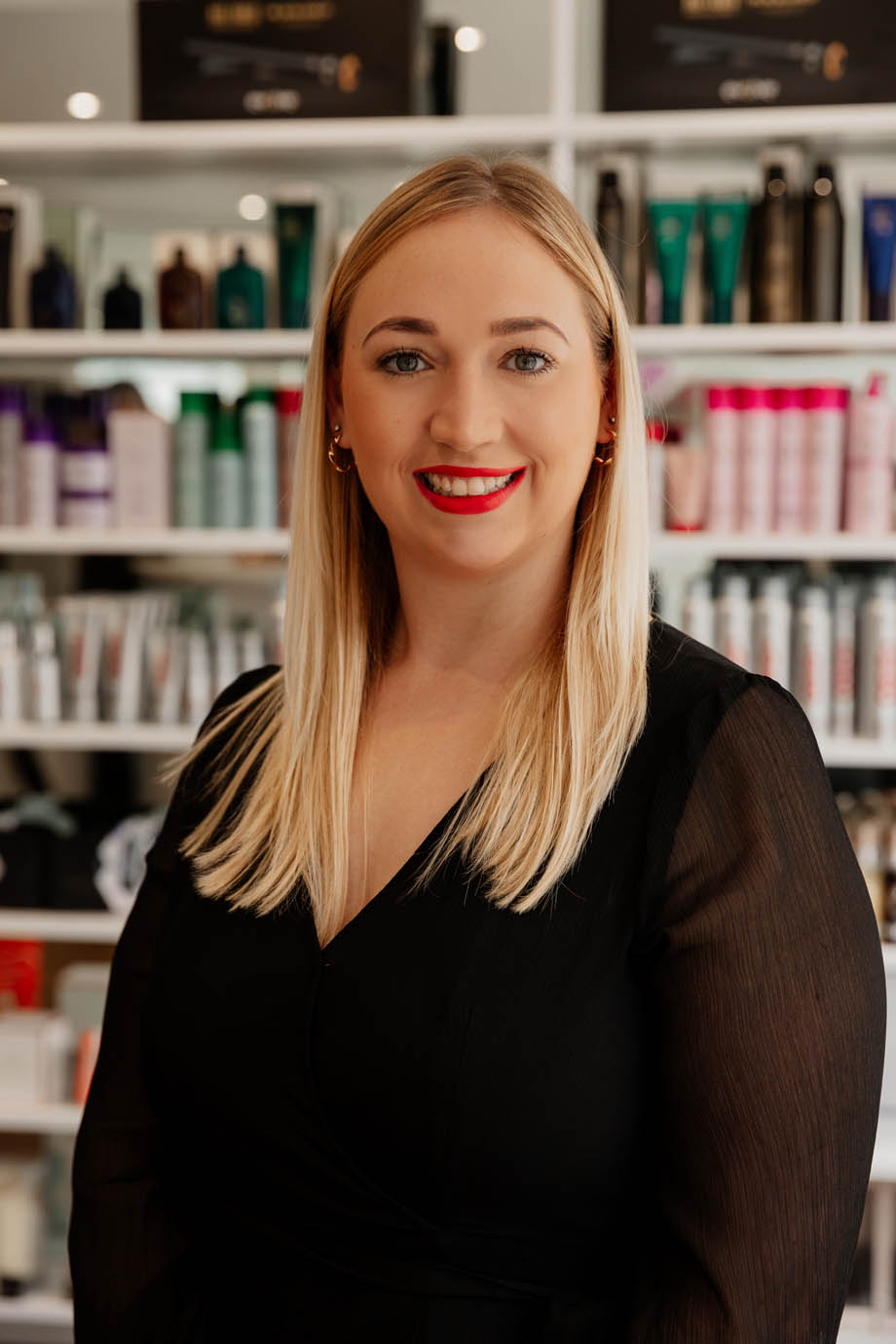 Beth became a full time member of the Freddie’s Team in 2004, but being Fred’s niece she was working in the salon on Saturdays and late nights from the age of 14.

With the hairdressing gene in her DNA she sailed through college and at the age of 17 she was studying for her advanced hairdressing NVQ and the intensive Colour Masterclass Course with product giant Schwarzkopf. She was the youngest ever person to complete the vigorous training.

Being shy in nature Beth joined the Freddie’s Artistic Team working behind the scenes, prepping models and colouring hair. She has ventured out on to the main stage at Hairdressing exhibitions and competitions, helping the team win the Schwarzkopf Creative Team competition 3 years in a row.

Beth’s passion for hairdressing lies in colour work, and no transformation or colour correction is ever too big to handle.

During her hairdressing career Beth has amassed a loyal following of clientele and is well known for her bouncy blow drys and voluminous looks. 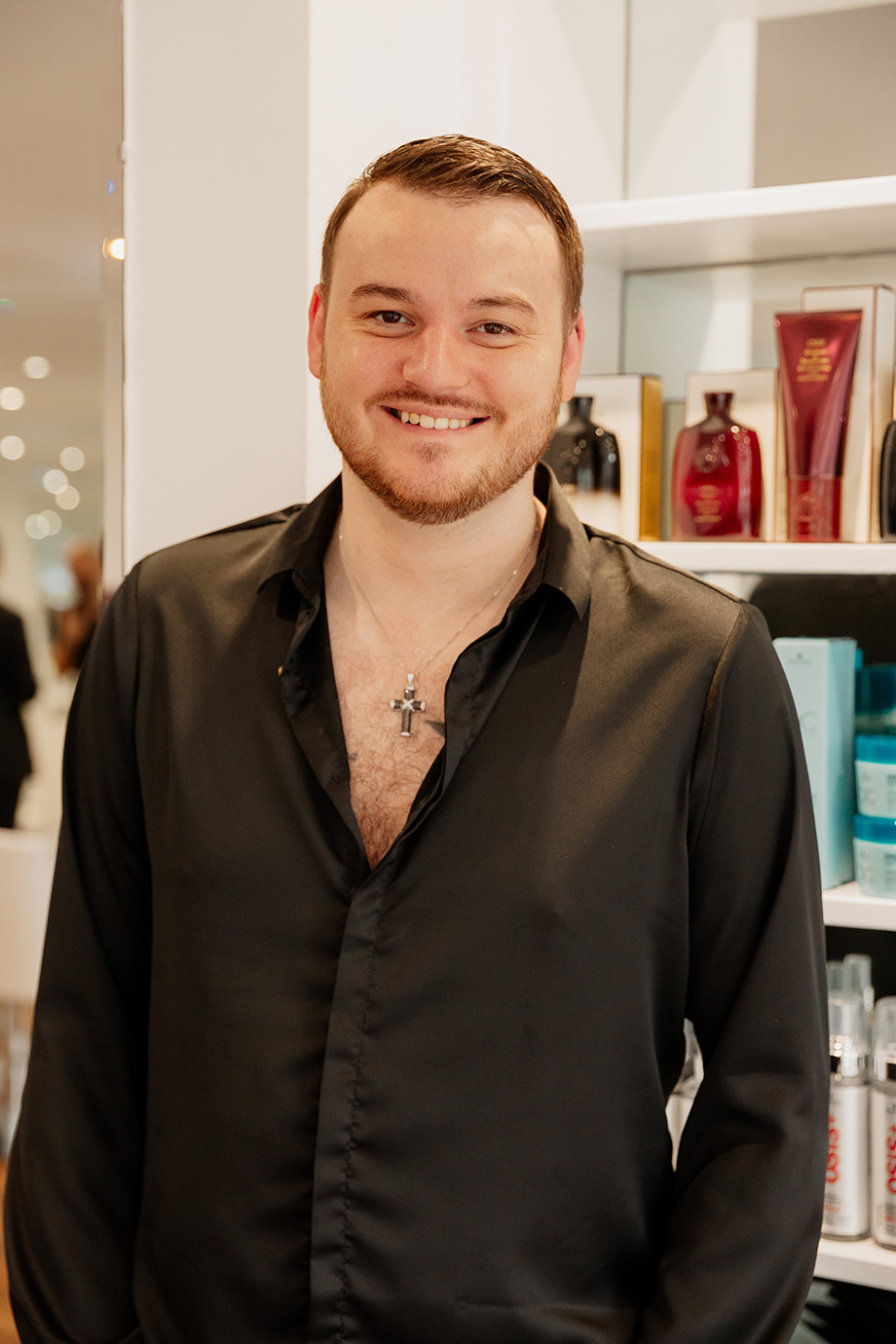 Nick joined the Freddie’s Team in 2007 straight from school and was initially a shy and unassuming junior. This didn’t last long! With a natural artistic flair and an unrivalled ability to gossip, Nick quickly became a hit with clients and was soon working as Fred’s colour technician.

Joining the Freddie’s Artistic Team, Nick has worked on stage at hair exhibitions and participated in many educational courses with Schwarzkopf and Oribe.

Nick continues to develop his hairdressing skills and is constantly pushing his skills and growing as a stylist. His loyal and dedicated clients are testament to his hard work and dedication to the industry. 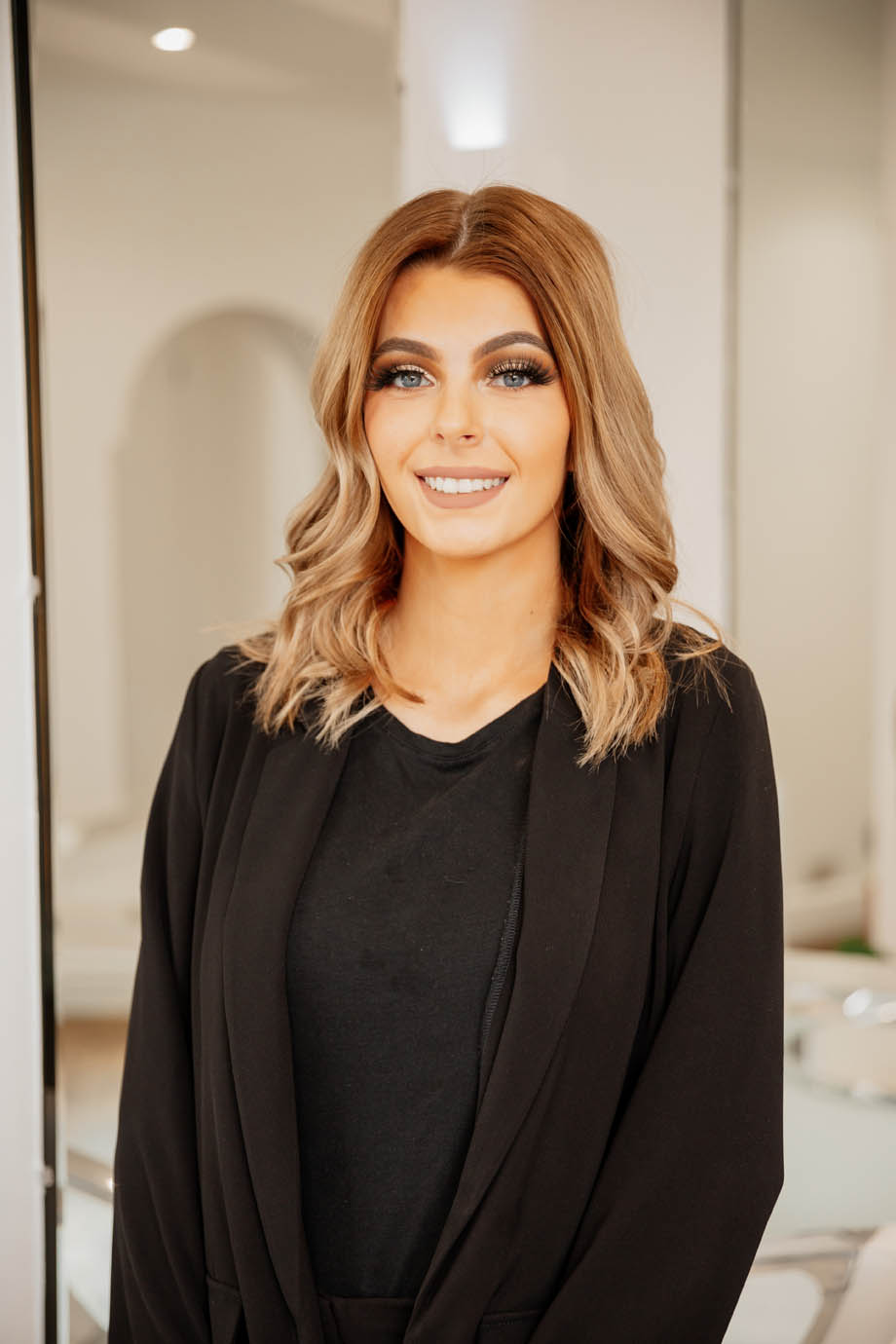 The newest addition to the Freddie’s Team, Katie joined in November 2018. With a passion for all things hairdressing, Katie completed her NVQ 2 in under 12 months – the quickest completion from any Freddie’s staff and any student at Accrington and Rossendale College. When the salon re-opens Katie is excited to start NVQ level 3 Advanced Hairdressing.

In the salon Katie works alongside Matt as a colour technician and in her free time and training sessions is mastering cutting techniques and starting to build up her own clientele. Katie has a strong determination to develop her skills as much as she can with hairdressing and keep reaching her goals. Katie is always keen to learn new techniques and push herself to her limit.

Since being at Freddie’s Katie has really come out of her shell and gained a lot more confidence. It’s been a pleasure to watch Katie blossom from being shy when she first started, to the next generation hairdresser she has become. 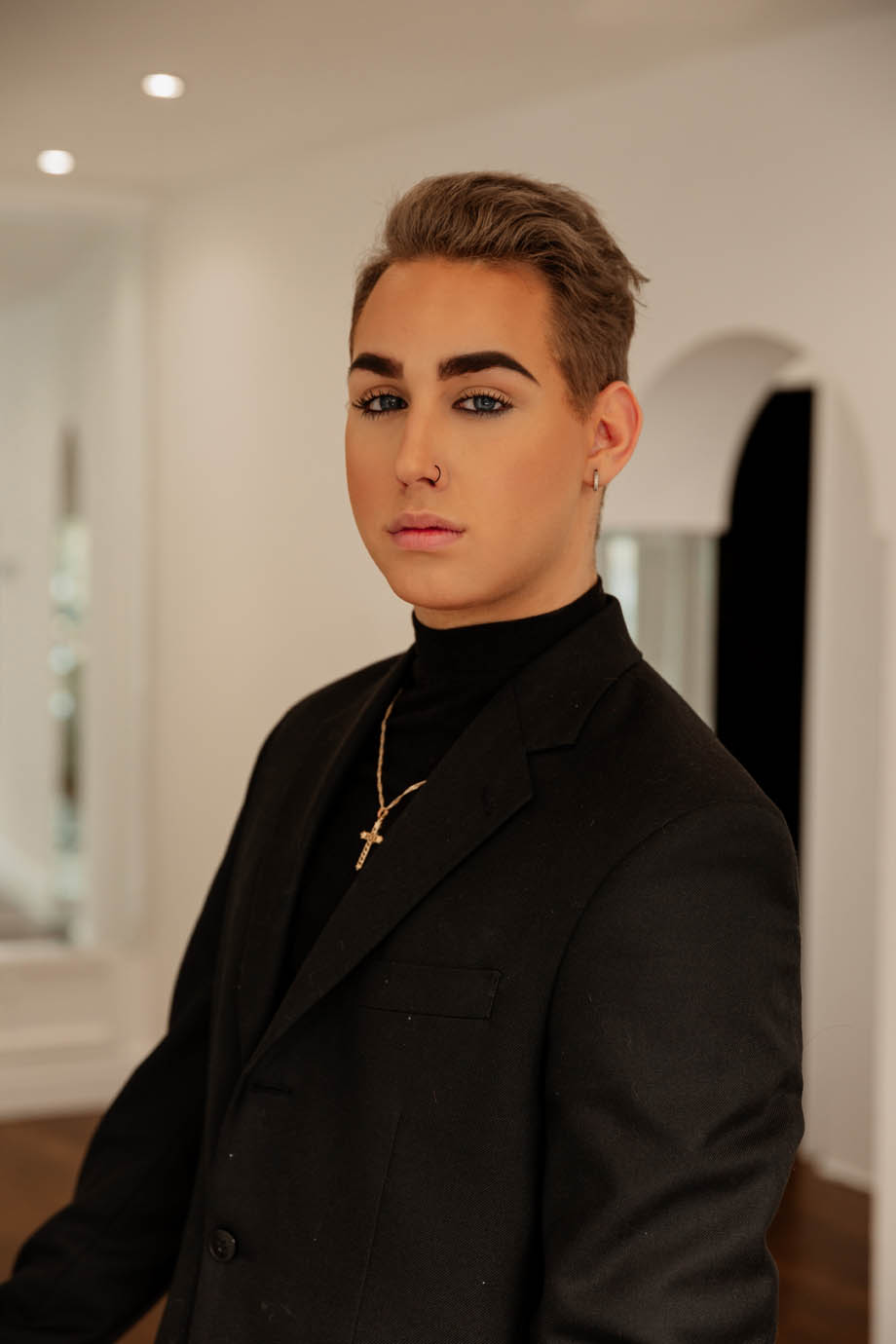 Jason, or Jay, joined the Freddie’s Team working full time in 2016. Prior to this Jay worked in the salon on Saturdays and late nights whilst still at school. Even at such a young age it was apparent the drive and passion Jason had to succeed in the hairdressing industry.

Since day 1 in the salon Jason has been a massive personality and was an instant hit with clients with his easy going demeanour and sassy personality.

Jason has achieved his NVQ2 in hairdressing and when the salon reopens will be starting his advanced hairdressing qualification. At the moment Jason is working alongside stylist Matt, becoming a great colour technician ready to start building up his own clientele. 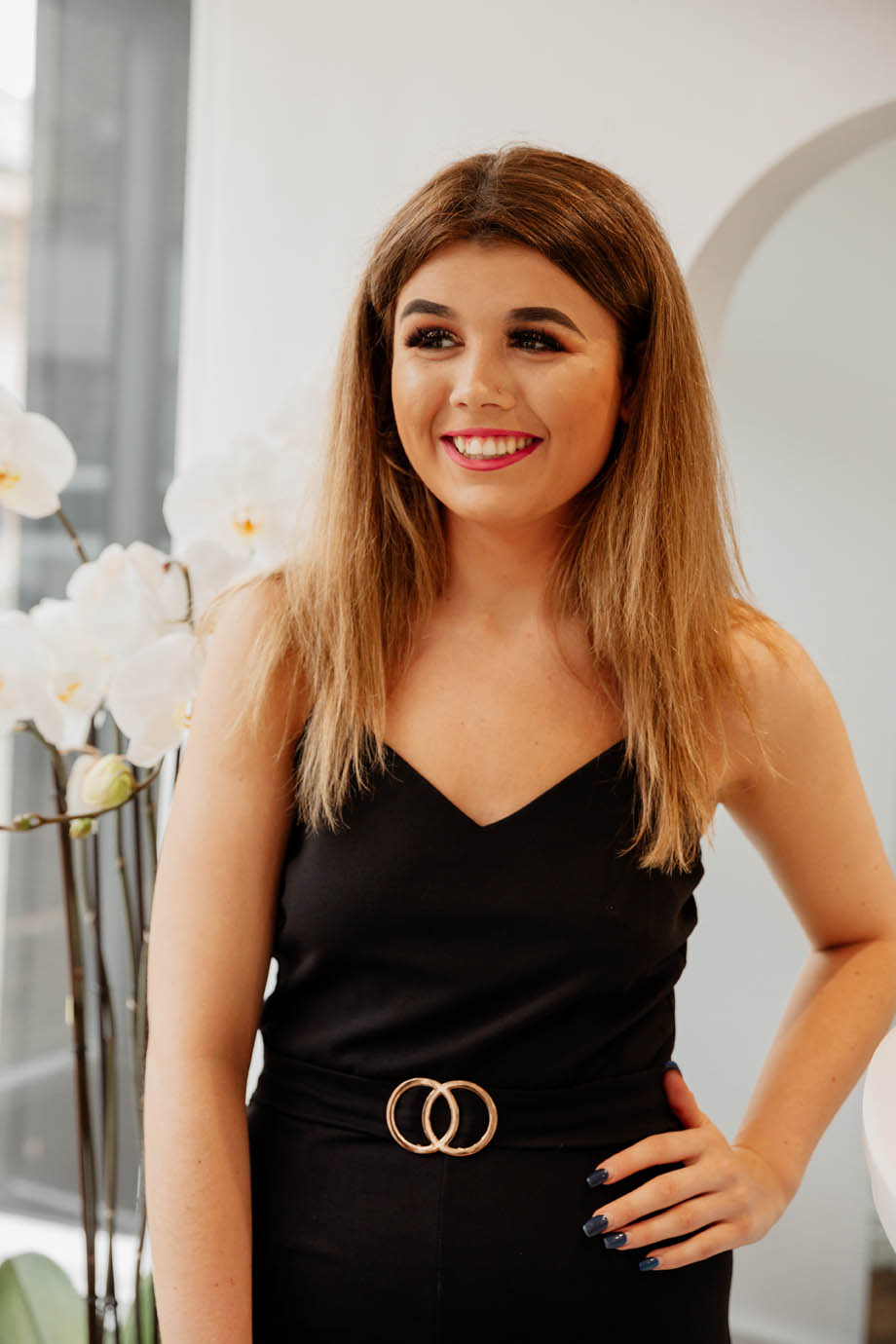 Leah joined the Freddie’s Team in 2016 and has come such a long way in that time. It has been a pleasure to watch Leah blossom from the moody teenager to the wonderful young woman she is now.

Leah has completed her NVQ2 Hairdressing and is about to start her Advanced Hairdressing qualification when the salon re-opens. Working as Fred’s technician, Leah’s confidence in herself and in her work has soared, earning her the position of Head Junior.

Leah says she can’t wait to learn more about colour corrections and transformations, and also to develop more of her hair-up skills to be able to provide a bridal hair service.

Website design by We Are Life | Photography by Wambam